Skip to content
Sleep apnea is a sleep-related breathing disorder, which causes breathing interruptions during sleep. These interruptions may last for about 10-15 seconds and repeatedly occur during sleep. This sleeping disorder is a potentially life-threatening health condition that usually goes undiagnosed. Sleep apnea is a prevalent sleep disorder that may lead to several chronic medical conditions when left untreated. Medical conditions associated with untreated sleep apnea include hypertension, obesity, diabetes, cognitive impairment, congestive heart failure, stroke, cardiac arrhythmia, heart attack, asthma, and cancer, among others.

Moreover, sleep apnea largely impacts sleep quality and is the main cause of excessive daytime sleepiness (EDS). Excessive daytime sleepiness is one of the major contributors to Road Traffic Accidents (RTA). Obstructive sleep apnea or OSA is a prevalent condition that leads to impaired cognitive functioning and excessive sleepiness, both leading to impaired driving ability. OSA is often associated with an increased risk of severe traffic accidents.

Driving requires the integration of various skills to ensure safety and competency while driving on the road. These skills include concentration, alertness, and activeness, among other cognitive skills. Excessive daytime sleepiness caused by obstructive sleep apnea may impair these skills. With poor concentration or alertness and excessive sleepiness, the risk of road traffic accidents increases while driving. As sleep apnea affects the quality of sleep, it also impacts daytime performance and alertness. If sleep apnea is left untreated, it can turn into a chronic disorder, and the person may be unable to stay awake and face cognitive impairment. This could lead to a lack of focus, and the person may be unable to react properly while performing normal tasks, including driving. People with untreated sleep apnea may experience excessive sleepiness during the day and may have a high risk of getting into a fatigue-related accident during driving. While many sleep apnea patients may not fall asleep while driving, they may lose their focus or alertness due to EDS, which may cause late reactions, leading to road traffic accidents. The link between road traffic accidents and OSA has been discussed in the medical industry for over the past three decades now. According to a study by L J Findley, drivers with OSA have seven times more risk of road traffic accidents compared to drivers without OSA symptoms. Hence, patients with OSA sleep disorder suffer a higher frequency of motor vehicle accidents than drivers without OSA. Drivers impaired with OSA may be a reason for several preventable severe road accidents. Several other studies have also supported this fact, although with varying degrees of risk involved. Furthermore, studies have also attributed the increased risk of motor vehicle accidents among drivers with obstructive sleep apnea to excessive daytime sleepiness. Evidence suggests that excessive daytime sleepiness correlates to the severity of the OSA as measured by Oxygen Desaturation Index (ODI) and Apnea-Hypopnea Index (AHI). Want to learn more about sleep apnea and other sleep disorders? Click here to read our previous blogs and Subscribe to receive the latest updates!

The prevalence of sleep apnea in commercial drivers is carefully investigated because crashes that involve heavy vehicles like buses and trucks are usually very disastrous and expensive. Such accidents may involve a high fatality rate. A study on commercial drivers suggested that three-fifth of commercial drivers experience sleep-related breathing disorders, and one in every four driver experiences excessive daytime sleepiness. A 2012 research study revealed that about 40% of heavy vehicle drivers have a risk of developing sleep apnea. Hence, it is important that long-distance drivers should be screened for obstructive sleep apnea. Moreover, there is a need for a threshold for the severity of sleep apnea to restrict drivers from driving with severe sleep apnea disorder, just like alcohol consumption levels. As patients with sleep apnea experience poor quality of sleep, they tend to be sleepier during the day and lack concentration and alertness. As a result, the risk of motor vehicle accidents during sleep increases. In the United States, sleep-related motor vehicle accidents account for nearly 20% of all accidents. More than 100,000 car accidents, 1,550 deaths, and over 40,000 injuries every year are caused by sleepy drivers. Most of these road traffic accidents can be prevented if the drivers are screened for sleep-related breathing disorders and treated at the right time. Sleep apnea is a common problem, which is found in over 5% of commercial drivers. However, in most cases, this sleep disorder remains undiagnosed. According to a survey conducted by European Sleep Research Society on candidates from 19 different countries, 17% of heavy vehicle drivers have fallen asleep while driving in the last two years. The factors contributing to sleepiness while driving were male gender, long-distance driving of over 20,000 km annually, high excessive daytime sleepiness, and development of OSA. In 2008, a passenger train collided with a freight train near Chatsworth, CA. This accident resulted in a loss of over 25 lives and over 100 injuries. Driver’s fatigue was found to be the probable cause of the collision. Following the incident, the Federal Railroad Administration enacted the Rail Safety Improvement Act of 2018 to include employee’s fatigue management components. In another accident relating to fatigue-related OSA, two freight trains collided near Chaffee, MI, in 2013. The collision resulted in fire, several injuries, and a bridge collapse. According to the report on the incident by the National Transportation Safety Board, the probable cause of the accident was the fatigue-induced degradation of the operator’s performance. The main reason for the operator’s fatigue was reported to be undiagnosed OSA. The accident resulted in damage worth more than $11 million. In drivers with obstructive sleep apnea, the Continuous Positive Airway Pressure (CPAP) treatment can normalize the risk of RTA, as CPAP treatment reduces the apnea episodes, providing a better sleep quality. A study compared the motor vehicle accident rates before and after CPAP in patients with three years of OSA. The results clearly stated that the RTA risk is highly reduced in patients undergoing CPAP therapy.

Can a Driver Still Drive after being diagnosed with Sleep Apnea?

As Federal Motor Carrier Safety Administration (FMCSA) doesn’t address sleep apnea, drivers can still drive motor vehicles even after being described with sleep apnea. However, FMCSA prescribes that a person with a clinical diagnosis of any medical condition interfering with the ability to drive safely is not eligible to drive any commercial motor vehicle. Once treated successfully, the driver may get the status to drive again. Sleep apnea can be treated effectively through CPAP therapy. However, a person with severe sleep apnea should avoid driving long-distance without getting treatment. A driver with sleep apnea symptoms should get the right treatment prescribed by a physician and should make sure that he/she is fully alert and doesn’t have EDS when driving. Are you experiencing excessive daytime sleepiness? Sign up for a sleep test today! Order WatchPAT 300, our innovative home sleep test equipment! 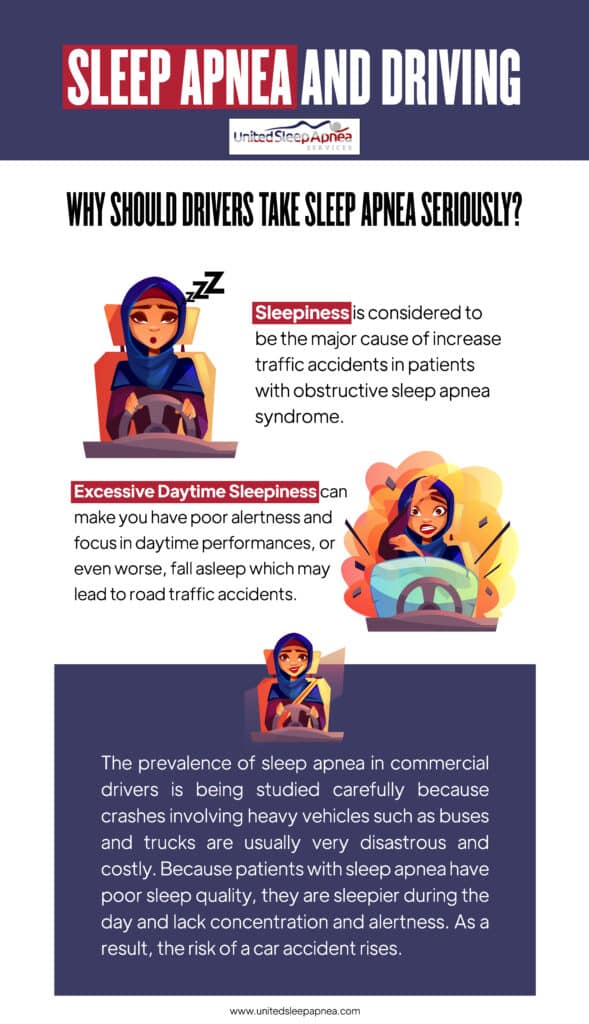 As it is clear from the above stats that EDS is a common cause of motor vehicle accidents, commercial vehicle drivers and transport authorities need to take the issue seriously. The drivers who experience excessive daytime sleepiness or fall asleep behind the wheels should be screened for sleep-related breathing disorders. Moreover, if a person experiences any of the below-mentioned symptoms, he/she should avoid driving and get screened for sleep apnea to prevent the condition from worsening.

Symptoms of sleep apnea include:

Do you experience any of the above symptoms? Get our innovative Home Sleep Apnea Test (HSAT) and check yourself for sleep apnea from the comfort of your home.

Cost of Accidents and Personal Accidents Due to Sleep Apnea

According to a report from Federal Motor Carrier Safety Administration (FMCSA), the total economic impact of motor vehicle accidents due to undiagnosed OSA in the United States was around $26 billion in the year 2015. The amount included damage to the vehicle, property damage due to accident, increased insurance premiums, medical expenses, and cost of lost wages. According to the report, there were more than 1.1 million reported motor vehicle accidents in the United States in 2014. Additionally, the National Highway Traffic Safety Administration (NHTSA) states that nearly 10 million road accidents go unreported in the country every year.

With an increased risk of road accidents, the cost of the vehicle and personal insurance premium also increases along with the cost of handling accident-related costs. This would include vehicle repair cost, medical expenses to treat an injury, repair cost of damaged property, and cost of lost wages. According to an estimate, an average motor vehicle accident would cost:
Furthermore, in a general organization, employees with untreated sleep apnea may cost the employer more every year compared to employees with no apnea or treated sleep apnea. For employees with untreated sleep apnea, the cost per employee is over $6000 more annually. This amount would include health care costs, absenteeism, occupational injuries, and driving accidents.

In addition, if the person with sleep apnea is a driver, the risk of accidents is increased, which means that the employer will have to bear additional costs of repair, medical expenses, and damages.

The danger of untreated or undiagnosed sleep apnea in the transportation industry increases as trailers, trucks, trains, and airplanes have a higher risk of public safety than passenger vehicles. Accidents involving these vehicles can be more tragic and costly for individuals as well as employers. Consequently, the average cost for accidents involving such vehicles will be extremely high.

According to a report by FMCSA, small-to-mid-sized trucking companies can save up to $19 million every year by diagnosing and treating the drivers for sleep apnea. Hence, it is important for employers to screen drivers for obstructive sleep apnea and take necessary actions wherever needed. 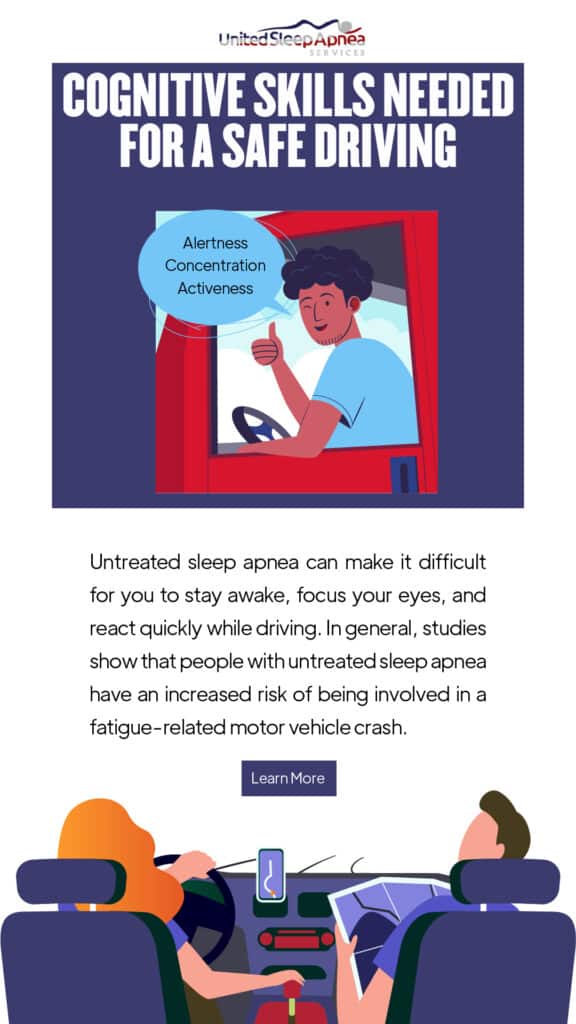 As sleep apnea is a potential risk, the type and severity of apnea can impact the health insurance premiums. In worst situations, insurance companies may also decline to provide coverage. A patient with sleep apnea may have mild, moderate, or severe symptoms. For patients with severe symptoms, premiums can cost more than those with mild or moderate symptoms. Generally, the more severe the symptoms are, the more expensive the premium is. Treatment adherence can also affect the cost of the premium. Screening drivers for sleep apnea and providing them the right treatment would help transport companies save huge money in auto insurance and health insurance costs.

Untreated sleep apnea may result in loss of health and wealth! Order our innovative HSAT kit today and diagnose sleep apnea while at home.

Sleep apnea is a common sleep-related breathing disorder found in over 5% of commercial drivers. This disorder results in poor sleep quality and excessive daytime sleepiness. This would cause drivers to lose concentration or fall asleep behind the wheel, resulting in road traffic accidents. Fatigue and drowsiness or EDS are the reason for over 29% of all motor vehicle accidents, and untreated or undiagnosed sleep apnea is the most probable cause of EDS. According to research, over 40% of drivers who drive heavy vehicles long-distance have a risk of developing sleep apnea. Sleep apnea, when left untreated, may result in the development of several chronic diseases, including cardiovascular diseases, stroke, hypertension, asthma, and cancer. The sleep-related breathing disorder may cause higher medical and vehicle insurance premiums. Hence, trucking companies should diagnose their drivers for sleep apnea and other sleep disorders to reduce the risk of road traffic accidents. Contact us now to get a cost-effective plan to screen your drivers for sleep apnea and reduce the risk of road accidents.
Take up the Epworth Sleep Scale test now!