What is the Ghrelin Hormone?

Ghrelin, also called Lenomorelin, acts as an orexigenic hormone that primarily regulates the feelings of hunger and appetite in your body. Other than the role of hunger, the hormone is involved in various anabolic and metabolic activities between the stomach and the brain.

In simple terms, the higher your ghrelin levels in the bloodstream, the higher your hungrier feeling, and vice-versa. We will discuss this hormone in detail, and how without adequate sleep, it can affect this important hormone, throwing it out of homeostasis.

Secretion and Circulation of Ghrelin (GHRL)

Once secreted into the bloodstream, the hormone reaches the hypothalamus of the brain (ghrelin-receptors). With the help of the central nervous system (CNS) signaling, the hormone stimulates the brain to communicate to other parts of your body about the lack of energy reserves and the need for food intake.

Ghrelin: What does it do

Though the ghrelin hormone’s primary function deals with hunger and appetite, it plays a vital role in many other body functions. 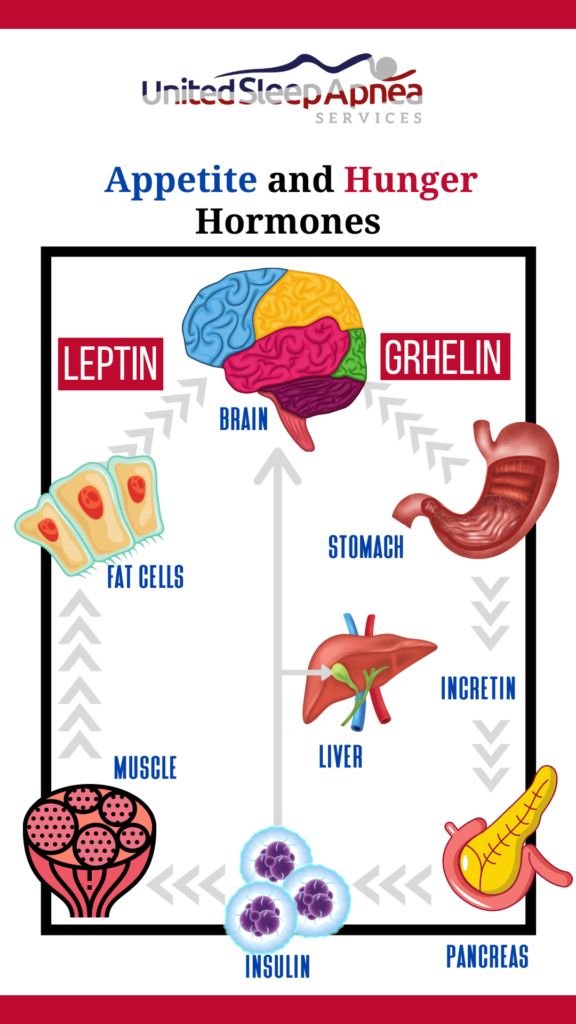 An in-depth study that analyzes the functions of the ghrelin hormone other than the role of hunger initiation lists the regulatory functions, involving glucose homeostasis, gluconeogenesis or glycogenolysis, energy expenditure, muscle differentiation, and fusion, sympathetic nerve activity, bone formation, and metabolism.

Wanted to know the other functions of the ghrelin hormone? Stay tuned with us on Facebook, Twitter, and other social channels…

As ghrelin levels are directly associated with food intake, its synthesis primarily is regulated by the food intake as well. The circulation of ghrelin levels increases before every meal or when you undergo fasting. Hence, the ghrelin hormone is referred to as the “hunger” hormone.

Since food intake regulates the ghrelin hormone synthesis, the hormone plays a vital role in regulating body weight over a longer period and not on a per meal basis. Hence, the overall weight gain or loss relates to the ghrelin levels besides other factors like sleep, higher fat intake, etc.

Researchers have also found that somatostatin and other hormones released as the by-product of digestion inhibits the secretion of the ghrelin hormone.

When your body starves for food intake, and there are proteins or carbohydrates subjected to metabolic activities—your stomach produces the ghrelin hormone, which increases the appetite for nutrition. This gives individuals a feeling of hunger, upon which food intake initiates.

Prader-Willi syndrome, one of the genetic diseases shows a strong correlation with the ghrelin hormone. The syndrome affects patients with obesity and excessive feelings of hunger. Adversely, these patients will have higher ghrelin circulation even before they start getting obese. This condition increases the severity of the syndrome more than expected.

In normal conditions, people with higher body weight and BMI tend to have lower ghrelin circulation levels in their bloodstream. When compared to lean or thin people, ghrelin levels are lower for the high bodyweight individuals. This justifies the fact that ghrelin does not decide the factor that causes obesity in highly weighted individuals. It’s just that higher weight individuals are excessively sensitive to the ghrelin levels.

Sleep and the Ghrelin Association

Though the ghrelin hormone came into the limelight just two decades ago (in the year 1999), researchers have conducted numerous studies concerning its synthesis, secretion patterns, and association with other body rhythms, like sleep deprivation and appetite.

Research published in the International Journal of Endocrinology infers that the ghrelin concentrations show a circadian pattern like other hormones such as; cortisol, melatonin, and leptin. The study found that the highest concentrations of ghrelin levels in the bloodstream occur during the daytime (routine hours) and the lowest concentrations occurring occur at night (no food intake due to the body’s sleeping cycle).

Get to know similar, surprising, and crucial facts about sleep and how it relates to your
health… But, before all, do you sleep enough?
Assess yourself!
Take up the Epworth Sleep Scale test to check the quality of your sleep!

Evidence that Relates Sleep with the Ghrelin Hormone

A news medical topic states that people living in industrialized countries have reduced their daily sleeping duration by half an hour to one hour. And this reduction in sleep duration links to an increase in obesity chances, which, in turn, can affect the metabolisms, food intake pattern, and weight gain.

The article also quotes the study of a set of workers whose average duration of sleep fell, to less than 7 hours and showed a higher BMI, increased leptin levels, and reduced ghrelin levels.

Another study, which analyzed the role of leptin and ghrelin in food intake regulation, states that obese individuals who lacked sleep exhibit a higher leptin level (anorexigenic) and lower ghrelin levels (orexigenic hormone).

Researchers have also examined the role of light (illumination during nocturnal sleep) that influences the ghrelin levels in the bloodstream. The study inferred that the light induces a circadian phase shift that altered the secretion of both leptin and ghrelin. This way, it’s clear that ghrelin levels vary with the sleep cycle (delayed circadian rhythm due to illumination).

WASO refers to the duration of wakefulness that occurs after the onset of sleep. This WASO serves as a primary parameter that measures sleep fragmentation, a symptom of a sleeping disorder. Research published in the weekly PLOS Medicine investigates the relationship between sleep efficiency, short sleep, and WASO with the circulating ghrelin levels.

Researchers in the study found a significant correlation between ghrelin and WASO. Those with WASO who had shorter sleep durations showed higher levels of the ghrelin hormone.

In specific, researchers claim that the decrease in the efferent vagal (vay-gul) activity or signaling may contribute to the variations in the majority.

The study also found that OSA strongly relates to higher chances of obesity and higher BMI than those individuals who are obese. Also, as OSA paves the way to hypertension, the ghrelin levels vary proportionally to the level of hypertension.

Why is Ghrelin important, and how do you fix it?

With so much importance, the ghrelin hormone has several major roles to play in hunger, appetite, and food intake. Though lower variations in the circulating level of ghrelin do not affect the food intake or hunger on a significant level, it might have a great impact if the situation persists over weeks, months, or years. Hence, paying attention to the ghrelin hormone paves the way for healthy signaling and the regulation of food intake throughout your life.

Having also seen the effect of sleep over the secretion of ghrelin levels, it becomes your utmost responsibility to take care of your sleep, including your sleeping cycle and duration. If you’re skeptical about your sleeping behavior, please get it checked so that you don’t fall prey to any ghrelin-related disorders or biological problems.

1 thought on “Ghrelin – the Hunger Hormone of Your Body”

Thyroid-Stimulating Hormone and its association with Sleep and Other Body Functions Insulin – the Prime Regulator of Blood Sugar Ghrelin – the Hunger Hormone of Your Body Cortisol – the Essential Stress (Sleep) Hormone in Today’s Lifestyle
Nocturnal Hypoxemia and its Relationship with Sleep and Sleep Disorders Sleep Apnea in Women Nocturnal Hypoxemia and its Effects on the Heart The Influence of Sleep on Testosterone Hormone Progesterone: The Magical Female Sex Hormone Everything You Need to Know About Circadian Rhythm and its Associative Role with the Sleep-Wake Cycle